reetings all, today I've decided to write a Herald article discussing the subject of advancement in life, technology and here at Global-RuneScape. As most of you will have noticed, today we performed a major update on the forums updating from phpBB 2 to 3, and as I'm sure most of you will have played around with, it contains many new features, such as friend lists, custom folders for your private messaging inbox, subscription to selected topics and more. (Click here for more information on the update)

Every day in life, something old is improved, or something new is made; looking at something you can relate to, RuneScape, the graphic updates that we're seeing become more frequent are making quite a bit change to the game, let's take a look at a 'Before and After' of the blue dragon. 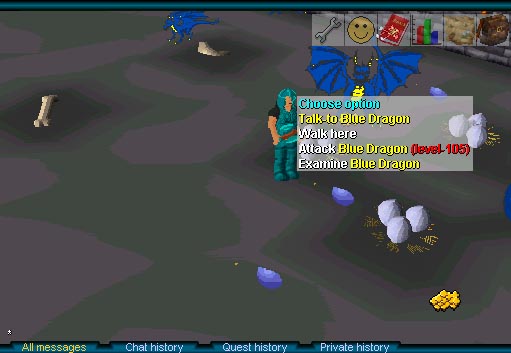 After (The new graphical changes in RuneScape 2): You can quite clearly see the stunning changes Jagex have made to the Blue Dragons since RuneScape classic, which in my opinion are fantastic, quite a lot of people complained, saying it has ruined RuneScape, but really; you have to accept change, which coincidentally is the idea of this article. I think it's great to be able to head down into a dungeon, and see some monsters that don't look like they came from out of a cereal packet, but instead, ferocious dragons that only the bravest would attempt to defeat. It's not only monsters Jagex have updated though, towns have been updated too - Varrock, Falador and Seers' Village just to name a few. Looking at Varrock and thinking back to when I started playing RuneScape as a level 3, running around collecting Dwellberries for Romeo and Juliet, I believe it would have been much more thrilling to do in this new medieval looking environment.

[M]ike: So Aliensvortex, how do you feel on the progress Global-RuneScape has made since you created the small InvisionFree website?

Aliensvortex: I could not imagine how it would be to run a large site when I started Global RuneScape. It has been great to work with Global RuneScape, even if I nearly shut the site down on several occasions. We were a small team when Global-RS was launched, but the other administrators did not have a genuine interest in Global-RS and I quickly found myself alone, rarely seeing anyone in the forums. I don't know why I continued working on the site, but when I look back, it has been a great experience. Sometimes I look at the news archive, and it's interesting to read what I wrote in 2005 on Global-RS.

[M]ike: Ah, I see, so some difficult times you've had to get through in order to reach what now, is an extremely successful RuneScape driven community. If somebody was to come to Global-RuneScape in search of a friendly RuneScape community, what would you say to them to convince them that Global-RuneScape was the place for them?

Aliensvortex: The Global-RS community is very friendly and not too big, so everybody knows each other. There is a sense of community unlike other large forums where people have to post hundreds of posts before people start recognizing their name, and friendly and helpful people quickly gain reputation, even with a few dozens of posts. The administrators and moderators read and contribute to other members' topics and can easily be reached through private messages, contrary to other forums where there are rules that state that you may not send messages to administrators.

[M]ike: Sounds pretty convincing to me! What are your aims for Global-RuneScape in the future?

Aliensvortex: I'd like to add new features related to RuneScape in the forums, so people can know more about each other's RuneScape accounts. Currently, we have a forum section for goals and achievements, but there are only a few members who actually post there. Also, all our guides need improvement and my big goal would be to complete all quest guides, calculators and other guides people are looking for. Generally, I'd like to improve every single bit of the site all the time and I rarely work on the same thing more than a few days in a row. The new forums took almost a week to complete, and I'm sure I haven't been working that much on a single feature for months! I always find tiny things that I "MUST" improve, so my aims are generally just to improve everything that needs improving.

[M]ike: So it seems your going to be a busy guy for the next few months, well good luck and I'll let you get back to fixing those pesky bugs with the new forums.

So as we can see from the above interview, Global-RuneScape has grown majorly over the past few years, and it seems as thought it still has a lot of growing to do!
Well, that's it for this weeks Herald, I shall leave you to enjoy the wonders of the new forums!