The Future of Jagex Games

nyone who plays RuneScape would know that it was created by Jagex Ltd a few years ago, and quite a number of people have been wondering what they have been doing in the meanwhile (apart from upgrading the game), especially after the mentioning of "a stunning new update" in the Behind the Scenes for November, and the latest press interview with Andrew Gower in which he says “There are many exciting projects in the pipeline”. Well, just for you, the staff have carried out a research on this, and here we have the finished product, "The Future of Jagex Games".

Before I give you all the fun little facts, you have to realise that Jagex is a company that develops MMORPGs. Try using some logic here, almost no MMORPG developers, especially the ones that are big & famous as Jagex sticks to one game; they start making new games, and this is the case with Jagex. After our little research, we found out that the working titles for the games that they are currently making are Mechscape and funOrb. The following is a list of trademarks that they've registered in the recent years:

First things first, there have been a few easily detectable signs of a new game or two in and around Jagex. Take a look at their site for example, second bullet point in the Key duties section. It reads "Creating models for environments, objects, vehicles, characters and special effects." Now, I have to agree that it'd be cool to have cars in RS, but that'll be long after we get guns for ranging. It also says "Ability to work with maximum size/complexity limitations and create great looking low-polygon count models," fifth bullet point in the requirements section, which suggests that this new game is likely to be Java-based. Rest assured, there's a good chance that this game will have better graphics than Jagex's current trademark game, as they're looking for workers who have "a good fundamental knowledge of and ability in ... lighting."

A few Jagex employees dropped hints of these new games in their own webpages as well. Take Thomas Woode's website for example. There's two drafts (1, 2) of space ships that have "Jagex ©" on them, and a few low-poly trooper models in his site. For a Java game, you obviously need low poly characters, so this could be used in a such game, although he has not mentioned Jagex there. It is also worth noting the blog post that the designer of the new Jagex website made about what he did for them. One of his drafts is available there, and you can see that funOrb is mentioned twice, and a game called "SpaceCombat" is also in the menu. More interestingly, he has this image at the bottom: 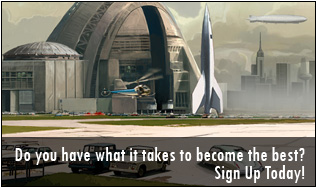 Well, that's pretty much all that we could find. To round it off, here's a list of URLs related to Mechscape that Jagex registered.

Note the number of fansite-similar URLs up there, looks like they have some grudge against fansites? Well, we better start securing our own URL pretty soon, or the next thing we know, the only one that's left will be global-m3ch5c4p3.com!
Last update: 11-Nov-2007