Interview with Slayerbelle
By Tim

ave you ever wanted a 99 cape? Because of how cool it looks? Or just for the level? What if you could be the first to a 99? Now I know what you’re thinking but everyone already has a 99 right? Well that’s not what this article is about, it’s about how Slayerbelle, an account created purely to slay, got 99 slayer. However, not just the ordinary 99 slayer - a slayer cape that is untrimmed! That’s right folks, Slayerbelle is the only person to get a slayer cape untrimmed! No other stats are level 99, not even hitpoints. Now, I know what you’re thinking, how did she do it? Well, we have an interview that might just answer most of your questions. If the article doesn’t answer all your questions, drop myself, Tim, a private message on Global Runescape and I will get an answer back to you as soon as possible! Enjoy!

That's good, so what gave you the input to go for the first person to Get 99 Slayer cape (untrimmed)?
After I got 2277 in April I started slaying on a level 1 defence account. I played on that account for a month or two, and then Lovvel started a rumor that I was going for an untrimmed cape. The thought had crossed my mind before, but I dismissed it because I thought it would take too long to merchant the money for the cannonballs needed on a new account. It was talking to Lovvel again a month or so after that that got me thinking about it. I didn't realize how many people there were who thought it was impossible, and I knew it hadn't been done before. There were only rumors and fake pictures, no proof of it being done. So then I started talking about the math with Amarajah, trying to decide if I could do it on Villaninja, my 1 def account, or if I would have to make a new one. I decided it would be less stressful to just start over from scratch. I worked out how I would make my money, came up with a name, and then I was on my way the last week in August.

But why go after it when you've maxed your other account?
Well I think that's the whole reason I did it. I didn't have any other levels to get on Villandra, so I could do whatever I wanted. I decided before I maxed that I didn't want to go for experience or ranks, because I didn't want to get caught in something that would never end. So I made new accounts to do what I really loved, getting levels, and more importantly, slayer levels. :p

At any stage did you feel like giving up?
Not once, this kind of surprised me. The first time I got 99 slayer I wanted to give up lots. But the second time through it was a lot faster and definitely easier. Doing something again isn't so bad when you've already done it once and know what it's like.

Was it hard at the very start to get the actual slaying started since everything on that account was gotten through it, none was given from your main.
I started the account the last week in August, and I gave myself the goal of being able to slay full time on October 1st. I really had no idea how long it would take me to make money and do all the quests and other prep work. Things actually went faster than I thought they would (I thought it might take longer than October 1st), and I was able to start slaying hardcore on Sept 21st, I think. It was hard work, but it wasn't really hard, I just had to do it. I definitely wouldn't have been able to do it without motivation. The whole process was very exciting, and very fun.

What are your favorite three tasks??
Black Demons, Dags, Kalphites

What’s your most hated task that you switch?
Jungle Horrors, Turoth

What tasks do you hate but do?
Desert Lizards, Fire Giants

Why do you hate fire giants?
Because people complain when I use cannon but I only attack one

Was there any reason why you named your account "Slayerbelle"?
I wanted the name to have something to do with slayer, and be easy to remember. It took me a few days to come up with one I liked. A lot of the names with "slayer" in them aren't allowed because of the skill. So I thought of sleigh bells, as an alternate spelling and kind of a play on words, then belle to make it a name. So I tried Sleigherbelle, and then was very surprised when Slayerbelle worked.

Do you have any other accounts?
Yes. I have 4 accounts with any good stats on them.

What does it feel like, now that you are the single genuine person to have an untrimmed 99 Slayer cape?
It's pretty cool, but a little bit odd since I don't really have any plans for using that account again. I know that really confuses some people, but that account's purpose is done. There will also be people who will keep trying to prove that I'm not the first one to do it, but I've never seen any real proof. Fake screenshots of level 99s where the stats don't add up to the slayer xp, or fake accounts on private servers. Of course the account names all conveniently don't show on hs. I don't believe that anyone would have gotten 99 slayer untrimmed and then gotten banned before they took any real pictures, or before anyone saw them and got their own picture.

Do you have any goals for the future?
I have a few nebulous goals, some things that I might like to do in the future but I'm not sure if I will. I know for sure I'll try for 99 summoning. After that I'm really not sure. I prefer getting levels to getting xp, so I'm not sure how long I'll be able to play on Vill without getting bored.

Is there anything you would have liked to change with something you did?
Ummmmmm. No, I don't think so. Everything went a lot better than I thought it would.

Do you ever think you will go for 99 slayer again? Untrimmed or just normal?
Yes, it's a distinct possibility. I'll have to see how summoning plays into it, and if I have another slayer account without summoning, or slayer with summoning. The main problem will be making money on a new account without being able to actively merchant, but there will still be ways to make money.

Were you around in Runescape Classic?
Yes, [I started in January 2004]. I was a lvl 78 in classic with 1008 skill total. I'm pretty sure range is my worst skill and agility is my best.

Do you prefer classic to the current one?
I did at first. I couldn't get into the beta, and I had my stuff switched back to classic, and then switched again a week or two later when they reduced the number of classic servers available. I've tried to go back and play classic now, it's awful. I really prefer rs2 now, it's so much better. Plus, it has slayer

If you wanted to thank anyone for helping you to get un untrimmed 99 slayer cape, who would it be?
Yes, there were people in my clan, Serenity, who smelted all of the cannonballs I used. The majority of the work was done by 4 people. I haven't asked permission to use their names, so I don't know if they would want to be named, but they know who they are and it would have been so much harder without their help <3. And there were also a few people outside the clan that traded cannonballs for steel bars.

Do you have any tips/tricks for anyone wanting to do slayer? Since you mastered the skill twice.
Well, I totally love lunar slaying, it's so fast. But no matter which method you prefer, just keep at it. Slayer is not something you can expect to do quickly, everyone has to work hard for it. Everyone has their own slaying styles, so just find the one that works best for you and go with it.

Thank you Slayerbelle for allowing myself to interview you
You're welcome, it was my pleasure :) 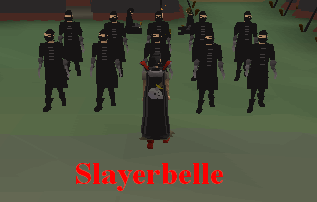 Well that’s it for the interview. But, just incase you were wondering even more to work out how she knew she could get it. She has given us all the planning and math’s she did to work out she could get the 99 slayer untrimmed cape:

Example 1: 13 mil range xp = 6.5 mil slayer xp = 0 hits = ~650k cannonballs. That leaves 6.5 mil slayer to get with melee xp, which = 8.65 mil hits, attack, defence, and strength. So if you cannon to 13 mil range, you can get 99 slayer with 94 attack, strength, defence, and hits. Obviously, there is a lot of room to play with, and you don't need to spend all that money on cannonballs. While it is good in theory, chances are it won't happen quite that well.

All kinds of examples between the two versions. You can also throw in mage to replace some of the melees.

Use cannon to 10 mil range = 5 mil slayer xp =~500k cannonballs - 8 mil slayer to get with melees = 10.6 mil hits, attack, defence, and strength. With this method I will have 99 slayer with 96 range, and 97 attack, defence, strength, and hits. Plenty of room. If I choose to keep slaying past 99, I can theoretically get 16 mil slayer xp and still keep my cape untrimmed. But since you can't cannon every task, and not every burthorpe task, in reality it would be closer to 15 mil slayer.

Methods - Cannon as much as possible, switching every melee task except for bloodvelds, sometimes abbys and spiritual mages. Whip on controlled except when str gets too far ahead with dagger specs.

That’s it fully for the article. I hope you now know some things about Slayerbelle and that you enjoyed the article. If you have any further questions feel free to Private Message myself on Global Runescape and I’ll get you some answer.